When it comes to bicycles with different types of seating positions, everyone is familiar with uprights and recumbents. There is, however, a lesser-known third option – prone. While these have formerly been limited to one-off bikes aimed at speed record attempts, Bird of Prey Bicycles is now offering a semi-prone aimed at everyday users. It may look a little quirky, but it is claimed to have several advantages over other bikes.

California-based architect John Aldridge designed the original Bird of Prey back in 1991. Bike-builder, and Active Bunch member, Russ Denny proceeded to give it physical form in 2010, and it was first publicly shown last year. This September, advertising for the production model officially began. 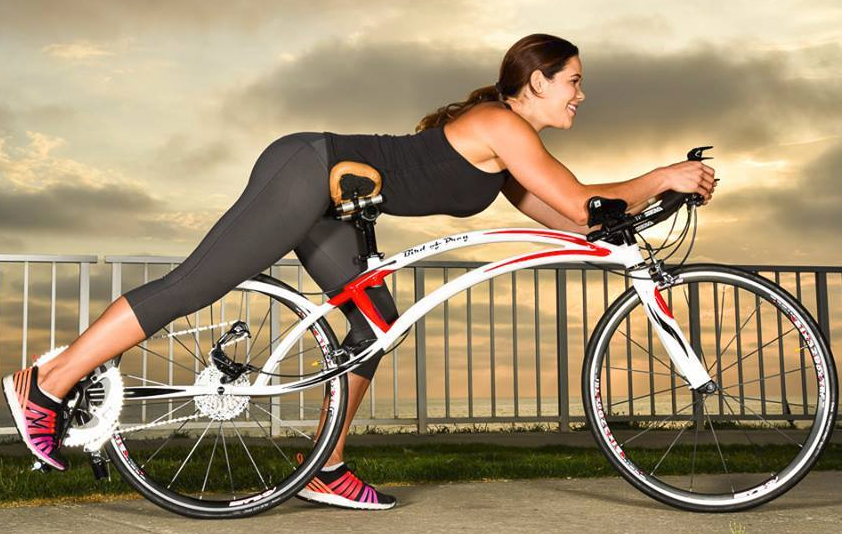 As can be seen, the rider lies front-down but looking up and ahead. Leather pads support their hips, elbows and hands, while their legs stick straight out the back – as if they were swimming, or flying, or both. This reportedly makes the bike and rider very aerodynamic, while also keeping the center of gravity low, allowing for quick and agile handling.

Due to the Bird of Prey’s ergonomic layout, riders are reportedly easily able to turn its big 60-tooth rear chainring (linked to a 36/11 cassette), producing more torque than would be possible than with a smaller ring. They are also able to spin like crazy when climbing hills, with their legs fully extended.

That said, it looks like visibility – both seeing and being seen by other traffic – could be a bit of a challenge.

No much in the way of specs are currently available, other than that the bike has an aluminum frame ... and a price tag of US$8,500. If you’re interested, John and his team are accepting orders now.